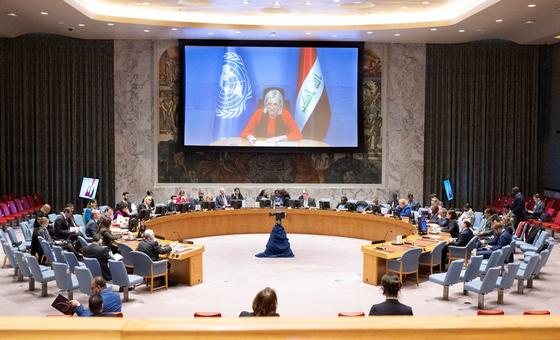 Jeanine Hennis-Plasschaert, UN Special Representative in Iraq, briefed the Security Council in New York, warning that “public disillusion is running sky-high”, as too many citizens have lost all faith in politicians.

Their protracted inaction has sparked protests and counter-protests, culminating in deadly clashes this past August.

“These tragic developments are indisputably the result of the inability of Iraq’s political class to cast the die,” she told ambassadors.

“In other words: actors across the spectrum failed to place the national interest first. They left the country in a prolonged impasse, further fuelling already simmering anger.”

Ms. Hennis-Plasschaert said the situation remains highly volatile. Although parliament resumed in late September, clashes occurred between protestors and security forces, among other acts of violence.

“And we have not seen the end of it yet. Last night, after three days of rocket attacks, Basra witnessed intense fighting, while smaller incidents were reported in other southern governorates,” she reported.

Despite renewed calls for elections, she wondered what guarantees are in place to ensure they will not again be held in vain.

This past Saturday, 1 October, marked three years since thousands of Iraqis took to the streets in nationwide anti-corruption protests.  Several hundred people were killed and many more were severely injured, abducted, threatened, or intimated.

The protests resulted in the previous government stepping down, and in early elections held last October.

“In other words, and I said it often: last year’s elections were extremely hard-earned. And with this in mind, the absence of a functioning government 12 months later is hard to justify,” she said.

Although new protests were expected on Saturday, turnout remained relatively low, the envoy reported, “not because Iraqis are now suddenly content, but because they do not wish to be instrumentalized in the ongoing power struggle – as made abundantly clear by many of those who took to the streets in 2019.”

While reluctant to discuss initiatives publicly, the envoy revealed that she has held “intense engagements” with the parties, including holding bilateral meetings on potential roadmaps and conducting shuttle diplomacy.

“Believe me, we tried. Non-stop. That said, we do not have a magic wand. Ultimately, it all comes down to political will,” she told the Council.

All sides have made “strategic mistakes and miscalculations” in the period since the election, she said, and they have missed valuable opportunities to resolve their differences.

“And with risks of further strife and bloodshed still very tangible, dwelling on who did what when is no longer an option,” she stressed.

“Hence, it is time for Iraq’s leaders – all of them – to engage in dialogue, collectively define core Iraqi needs and pull the country back from the ledge. In other words, all leaders should assume responsibility and return the spotlight where it must be: on the people of Iraq.”

Regarding solutions, Ms. Hennis-Plasschaert highlighted the need for “genuine and timely dialogue” alongside willingness to compromise.  Delivering a functioning government is merely the first step to overcoming the current crisis, she said.

The UN envoy added that a wide range of critical issues also must be addressed, chiefly adoption of a federal budget, while action towards transformative change must begin.

She pointed to 20 years of wasted opportunities for meaningful dialogue and badly needed reforms in Iraq, saying leaders must acknowledge that systemic change is vital for the country’s future.

This is also critical to fight corruption, which she described as being “a core feature of the current political economy”. Previous reform efforts have been “actively undermined or obstructed”, she said.

Ms. Hennis-Plasschaert also addressed the related issue of reliance on patronage and clientelism, which has resulted in a ballooning, inefficient public sector.  Oil-rich Iraq is also a country where private and partisan interests have led to resources being diverted from investment in national development.

“What I am saying is Iraq’s political and governance system ignores the needs of the Iraqi people, or even worse, actively works against them. Now, pervasive corruption is a major root cause of Iraqi dysfunctionality. And frankly, no leader can claim to be shielded from it,” she said.

“Keeping the system ‘as is’ will backfire, sooner rather than later. That said, it is important to frame it as precisely that: a system, rather than a collection of individuals or a series of events.”

Iran and Turkey have been conducting shelling in the region, establishing a “new normal” for Iraq, and she called for an end to these “reckless acts” which have caused deaths and injuries.