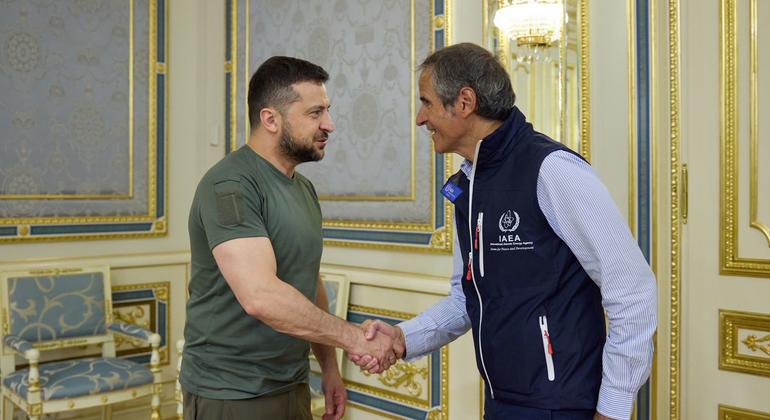 Speaking to reporters, agency chief Rafael Mariano Grossi expressed confidence that they will be able to safely conduct their technical mission, which follows months of consultations amid fears of a potential catastrophe at Europe’s largest nuclear facility.

The mission will take a few days, he said, though adding that it could be “prolonged” if they can establish a continued presence at the site.

The Zaporizhzhia Nuclear Power Plant has been occupied by Russian forces since the early weeks of the conflict and has come under repeated shelling in recent weeks.

Asked if he believed Russia will allow the agency to see what is really happening there, Mr. Grossi responded that his team is made up of very experienced people.

“I bring here the best and the brightest in safeguards, in safety, in security, and we will have a pretty good idea of what’s going on,” he said.

Mr. Grossi was also asked by a journalist how they could help avoid a feared meltdown or nuclear incident at the plant.

“This a matter of political will,” he said. “It’s a matter that has to do with the countries that are in this conflict, in particular the Russian Federation, which is occupying the place.”

Mr. Grossi is leading the 14-member mission from the Vienna-based IAEA, which set out for Ukraine on Monday.  He met with President Volodymyr Zelenskyy in the capital, Kyiv, the following day.

The team’s priorities include ensuring nuclear safety and security at the plant, as well as undertaking vital safeguard activities, and assessing the working conditions of the Ukrainian personnel working there.