The State government has officially not given any casualty figure but the Prime Minister and Chief Minister have announced the ex gratia for the dead and for the injured.

The State government has officially not given any casualty figure but the Prime Minister and Chief Minister have announced the ex gratia for the dead and for the injured.

At least 90 people have died, while more than a 100 other have been admitted and are under treatment a colonial era cable bridge collapsed in Gujarat’s Morbi town on Sunday evening. Over 350 people plunged into the river.

According to Morbi legislator and the State government minister Brijesh Merja, the number will likely go up significantly.

The State government has officially not given any casualty figure but the Prime Minister and Chief Minister have announced the ex-gratia for the dead and for the injured.

ANI reported that Prime Minister Narendra Modi has decided to cancel his roadshow to be held in Ahmedabad.

Several teams of NDRF and personnel of Navy and Air Force have been ordered to be airlifted to the site to help in the rescue efforts and comb the river bed as many people are feared drowned in the 10 feet deep water.

The authorities have launched a rescue operation amidst chaos at the site after the colonial era bridge was reopened after the repair and renovation on October 26th.

It has also emerged that the bridge was reopened after the repair work done by a private trust and fitness certificate was not submitted to the local civic body while reopening it.

Here are the live updates:

Gujarat Chief Minister Bhupendra Patel visited Morbi city in the state on Sunday night and took stock of the ongoing rescue operation after a newly-restored suspension bridge over Machchhu river collapsed in the evening, killing at least 90 people. Gujarat Chief Minister Bhupendra Patel at the site to take stock of the situation after an old suspension bridge over the Machchhu river collapsed, in Morbi district on Oct. 30, 2022.
| Photo Credit: PTI

After reaching Morbi, Mr. Patel along with Minister of State for Home Harsh Sanghavi, reached the river bank and took details about the ongoing rescue operation from the officials a State government release said.

Mr. Patel and Mr. Sanghavi then reached the Morbi Civil Hospital to meet the injured victims of the mishap.- PTI

Prime Minister Narendra Modi who is on a three-day tour to Gujarat and Rajasthan has decided to cancel his roadshow to be held in Ahmedabad on Monday in the wake of the Morbi cable bridge collapse incident.

Late on Sunday evening, the BJP Gujarat media cell informed that “The Page Committee Sneh Milan program to be held in the virtual presence of Prime Minister Modi has been postponed.”

Speaking to ANI, BJP Gujarat media convenor, Dr Yagnesh Dave confirmed the news that there shall be no programs of celebration to be held tomorrow in the wake of the Morbi tragedy- ANI

For Ahmedabad resident Vijay Goswami and his family members, it was a close shave as they had visited the suspension bridge in Gujarat’s Morbi on Sunday afternoon, but returned halfway through the bridge out of fear after some youths from the crowd started shaking it.

A few hours later, their fears proved right when that bridge on the Machchhu river, a tourist attraction, collapsed around 6.30 pm.

Goswami said when he and his family were on the bridge, some youths started shaking the bridge intentionally, making it difficult for people to walk. He said since he felt this act could prove dangerous, he and family returned without proceeding further on the bridge. He said he even alerted the bridge staff about it, but they were indifferent.

“There was a huge crowd on the bridge. My family and I were on the bridge when some youths started shaking it intentionally. It was impossible for people to stand without holding any support. Since I had a feeling that it may prove dangerous, my family and I came back after covering some distance on the bridge,” Goswami told reporters after reaching Ahmedabad.

“Before leaving the spot, I alerted the on-duty staff to stop people from shaking the bridge. However, they were only interested in selling tickets and told us that there is no system to control the crowd. Hours after we left, our fears turned true as the bridge eventually collapsed,” he said.

In a video that has gone viral on social media, some youngsters can be seen kicking the ropes of the bridge and shaking it to scare other tourists.

A local resident said, “There were nearly 300 people on the bridge, which was opened a few days back for the public. Majority of the victims were children, as they came here to enjoy their Diwali vacation. Locals rushed to the spot immediately after the mishap, and pulled out many people alive.” A large number of people living in different parts of Morbi rushed to help those who fell into river after the bridge collapse.- PTI

According to sources, the BJP is contemplating to cancel PM’s roadshow and other political events in the state. There is also a possibility of PM Modi visiting Morbi tomorrow to take stock of the situation as the death numbers are likely to go up.

The tragedy has occurred on the eve of announcement of Gujarat assembly polls, causing massive embarrassment to the ruling BJP, which lined up several big events and public rallies of PM Modi for October 31 and November 1 in the State.- Mahesh Langa

The suspension bridge on the Machchhu river in Gujarat’s Morbi that collapsed on Sunday evening was reopened for the public just four days back after seven months of repair work by a private firm, but had not received the municipality’s “fitness certificate”, an official said.

“The bridge was given to Oreva company for operation and maintenance for 15 years. In March this year, it was closed for the public for renovation. It reopened after renovation on the Gujarati New Year day celebrated on October 26,” said Chief Officer of Morbi Municipality Sandeepsinh Zala.

An “engineering marvel” built at the turn of the 19th century, the suspension bridge was said to reflect “the progressive and scientific nature of the rulers of Morbi,” as per its description on the district collectorate website.

Sir Waghji Thakor, who ruled Morbi till 1922, was inspired by the Colonial influence and decided to construct the bridge, an “artistic and technological marvel” of that period, to connect Darbargadh Palace with Nazarbag Palace (the residences of the then royalty).

The bridge was 1.25 metres wide and spanned 233 metres, and was meant to give a unique identity to Morbi using the latest technology available in those days in Europe, as per the collectorate website.- PTI 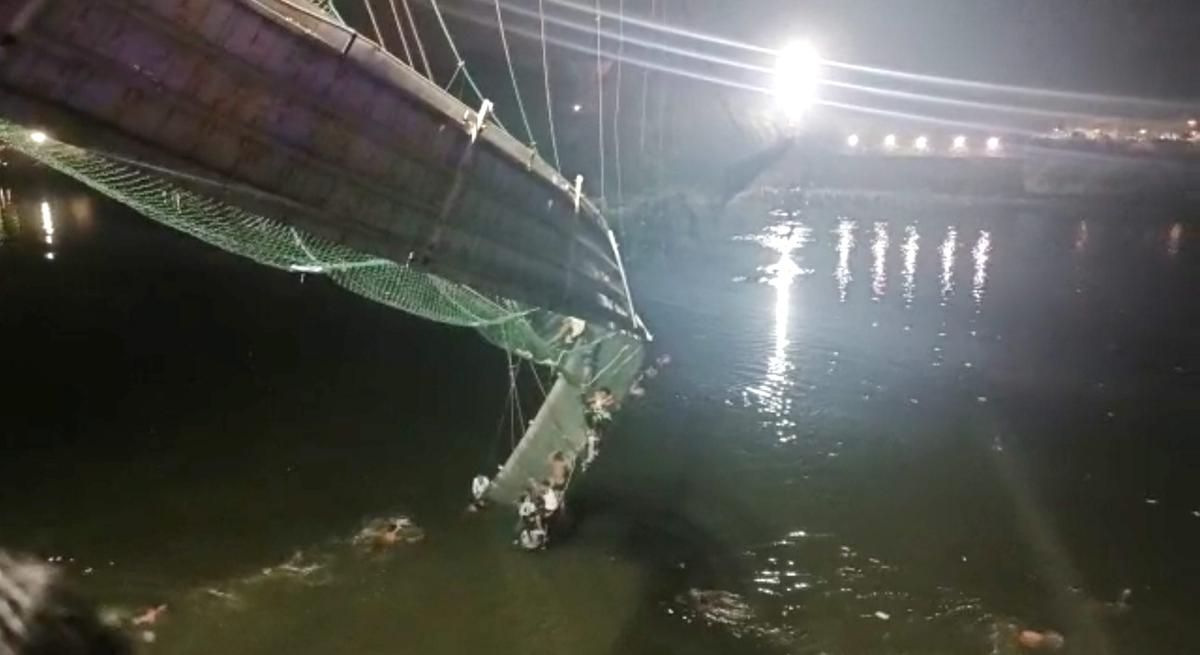 Rescue operation under way after an old suspension bridge over the Machchhu river collapsed, in Morbi district on October 30, 2022.
| Photo Credit: PTI

Eyewitnesses said there were several women and children on the British era “hanging bridge” when it snapped, plunging them into the water below.

Some people were seen jumping on the bridge and pulling its big wires, an eyewitness said. The bridge may have collapsed due to the “huge crowd” on it, he added.

People fell over each other when the bridge collapsed, he said.

“I had come to the river bank along with friends after my office hours when we heard the sound of the bridge snapping. We rushed there and jumped into the water to save people,” an eyewitness said.

“We rescued some children and women,” he said.

A man who was injured in the incident, said the collapse was sudden and may have been due to too many people on the bridge.

Due to the Diwali vacation and being a Sunday, there was a rush of tourists on the bridge, a major tourist attraction- PTI

The death toll has risen to 90 in the Morbi tragedy. Meanwhile more than a 100 people have been admitted and are under treatment.- Mahesh Langa

For rescue and relief operation three platoons of NDRF with 50 personnel of Indian Navy, 30 personnel of IAF along with two columns of Army personnel and seven teams of fire Brigade have left for Morbi with advanced equipment from Rajkot, Jamnagar, Diu & Surendranagar: Gujarat CMO- Mahesh Langa

See also  ‘We can do better, we must’ declares departing UN climate change chief, as COP27 looms over horizon | Vice President Jagdeep Dhankhar prayed for the safe rescue of all.

“Distressed to hear about the tragic incident in Morbi, Gujarat. I pray for the safe rescue of all and the speedy recovery of those injured. My thoughts are with the affected families,” the Vice President Secretariat said in a tweet quoting Dhankhar.

Expressing sadness, Mr. Modi, in a tweet said he has spoken to Gujarat Chief Minister Bhupendra Patel and officials. “Relief and rescue operations are going on in full swing and all necessary assistance is being provided,” the prime minister said.

President Murmu, in a tweet, said, “The tragedy in Morbi, Gujarat has left me worried. My thoughts and prayers are with the affected people. Relief and rescue efforts will bring succour to the victims.” Delhi Chief Minister Arvind Kejriwal, whose Aam Aadmi Party is making an all-out effort to dislodge BJP from power in the poll-bound state, tweeted, “Very sad news coming from Gujarat. Many people are reported to have fallen into the river after a bridge collapsed in Morbi. I pray to god for everybody’s life and well-being.” – PTI

Congress president Mallikarjun Kharge on Sunday said he was deeply saddened by the suspension bridge collapse in Gujarat’s Morbi that claimed at least 60 lives and appealed to party workers in the state to extend every possible assistance in rescue work.

Former Congress chief Rahul Gandhi also said the news of the bridge collapse accident was very saddening, and appealed to all Congress workers to extend all possible help to the injured.

At least 60 people were killed after a nearly century-old suspension bridge on the Machchhu river in Gujarat’s Morbi city collapsed this evening, officials said.

“Deeply saddened by the tragedy that has struck us with the collapse of the suspension bridge in Morbi, Gujarat,” Kharge said in a tweet.

“I appeal to the @INCGujarat workers to extend every possible assistance in rescue work & helping the wounded. My condolences & prayers are with the bereaved families,” he said.- PTI

Rescue operation under way after an old suspension bridge over the Machchhu river collapsed, in Morbi district on October 30, 2022
| Photo Credit: PTI

At least 90 people have died, while more than a 100 other have been admitted and are under treatment a colonial era cable bridge collapsed in Gujarat’s Morbi town on Sunday evening.

Authorities have launched a rescue operation amidst chaos at the site after the colonial era bridge was reopened after repair and renovation on October 26.