Hakeem Jeffries launched a bid on Friday to become the Democratic leader, promising his colleagues in a letter that he would empower and protect them — and expand their ranks. 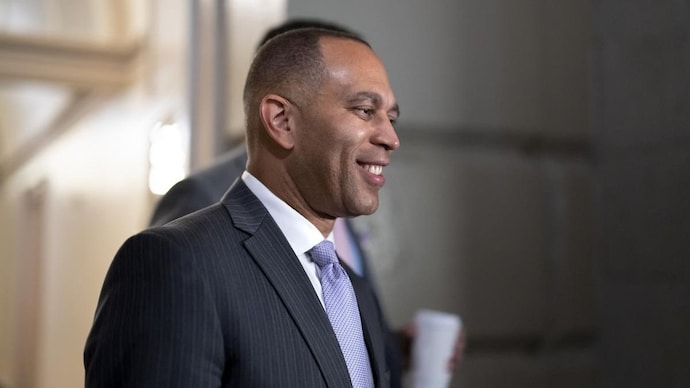 By India Today Web Desk: US Congressman Hakeem Jeffries of New York is likely to succeed Nancy Pelosi as the Democratic party’s leader in the House of Representatives. Jeffries launched a bid on Friday to become the Democratic leader, promising his colleagues in a letter that he would empower and protect them — and expand their ranks.

In a sign of Jeffries’ emerging power, Nancy Pelosi, House Majority Leader Steny Hoyer and House Majority Whip Jim Clyburn backed him after announcing they would step down from their leadership posts.

Congressman Raja Krishnamoorthi said, “I know Chairman Hakeem Jeffries well, and I am confident he will be a tremendous leader for the Indian-American community.” Krishnamoorthi, while talking to the media, said,“I am proud to endorse Hakeem Jeffries to serve as the next House Democratic Minority Leader.”

ALSO READ | Hour’s come for a new generation: Nancy Pelosi to step down from US House leadership

“I have spoken to Hakeem at length about the many important issues impacting the health and prosperity of the diaspora, and he keenly understands the need to implement high-skilled immigration reform, to grow small businesses, and to further expand and enhance the US-India relationship,” Krishnamoorthi said.

A 52-year-old native of the New York City borough of Brooklyn, Jeffries holds degrees from the State University of New York, Binghamton, Georgetown University and New York University Law School. He began his career as a lawyer before being elected to the New York state legislature, where he championed affordable housing and worked on policing issues, notably the controversial practice known as “stop and frisk.” He is married and has two children.

NANCY PELOSI TO STEP DOWN

Nancy Pelosi, the dominant political operator, legislative tactician and face of House Democrats for two decades, and the first woman to serve as Speaker, announced on Thursday that she would leave the leadership ranks in January following narrow election losses that cost Democrats their majority, but would remain in Congress.

An 82-year-old California liberal, Pelosi made her announcement during a speech on the House floor – drawing applause from Democrats even as many Republicans decided not to attend. She said she will not retire from the House but continue to represent San Francisco as she has done for 35 years.

(With inputs from agencies)